WTF (WHAT THE FUCK) 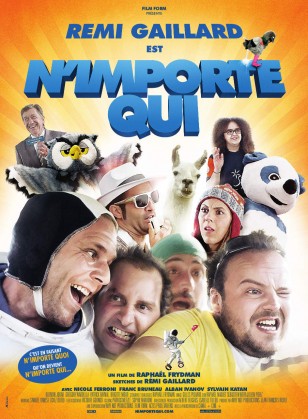 Short synopsis : After his number-1 fan is injured, Remi Gaillard – the French Borat with 1.4 BILLION online hits – decides it’s time to come out of retirement… or not...

Long synopsis : For more than a decade Rémi Gaillard's online pranks have won him international fame. Ten years of doing ‘whatever’: hyper sketches, hidden cameras and tricks that have made him and his cohorts famous. He's a star - hilarious, outrageous, a French Borat with more than 1.4 billion online views. But for Rémi, the reality's a lot bleaker. At 38 he’s still on benefits, still living in his tiny apartment in Montpellier and still listening to his girlfriend complaining that instead of ‘whoever’ it’s time for him to become ‘someone’. Self-doubt's getting the better of him. His pals have all got families and jobs. Rémi decides to give it all up. It’s the end of an era. He marries his girlfriend, who is 6 months pregnant. His father-in-law gets him a job on a car lot. He moves to a little house in the suburbs. A new ‘normal life’ for a new Rémi - no more ’whatever’ for him. There are temptations everywhere. But he’s promised his wife - he won’t break. Then his number one fan, a 16-year-old kid who never got over his hero’s retirement - tries to imitate one of his pranks and winds up flattened on the motorway, disguised as a snail. At his hospital bedside, Rémi makes him a promise... But as Rémi Gaillard knows better than anyone – to become ‘whoever’ he’ll have to do 'whatever'. And to do 'whatever', he’ll have to convince his former partner to get the old gang back together, and to strike harder than ever…