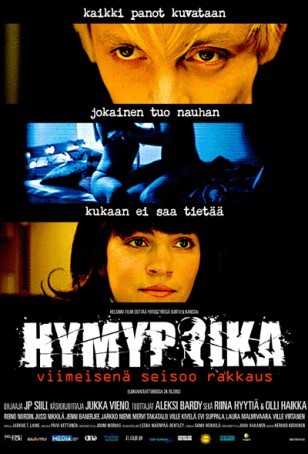 Long synopsis : Taavi is 18 - artistic, intelligent, intense. An orphan since the age of 10, Taavi carries a camcorder wherever he goes, obsessively trying to capture moments of beauty and truth. Jere is charismatic, smooth-tongued, an impulsive ladies’ man. He has few moral inhibitions – a fact that doesn’t worry him too much. Together with their friends Sami and Markus, they set up a club. The rules are simple: each member must bring to each meeting a videotape of his latest sexual adventure. The tapes can be shot openly or covertly, with a regular partner or a stranger. No boundaries apply. For Jere, the club is a springboard for ever more extreme, ever riskier sexual experimentation. Unconsciously, Taavi uses it to recreate the traumatic moment that has defined his life. And Sami and Markus have their own agendas. What began as a game is hijacked by dangerous compulsion. Relationships implode, girlfriends are replaced by prostitutes and swingers. As their exploration of playful, exuberant eroticism gives way to darker currents of coercion and abuse, Taavi and Jere, Sami and Markus, are forced to confront their own morality in the viewfinder.